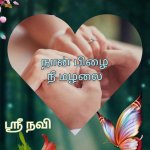 Aanandhan's marriage to Meiruna was held twice before she became a major legally .So it is null and void and can't be registered legally. So she is not his first wife. only his marriage to Manaswini is legal. She is his only wife legally.
Anandhan has done a legal offence when he married Miruna second time because Miruna was a Minor bur Aanandhan was a Major legally at that time,he is legally punishable. Ofcourse the marriage will be null and void